As I go through life, and especially when I travel, I am reminded of a lesson from Mark Twain:

“We are all alike, on the inside.” 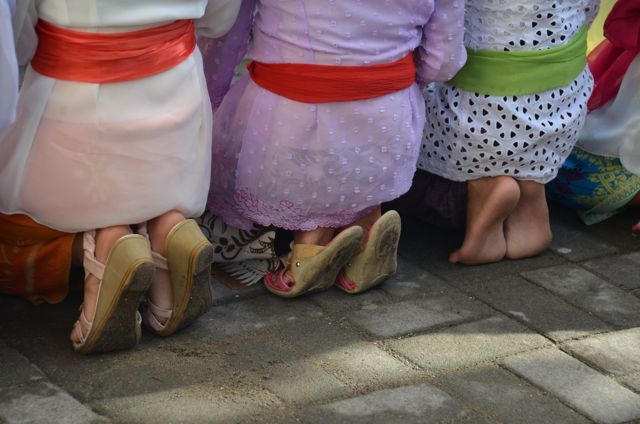 Regardless of where I have voyaged around the world, I have drawn the same general conclusion: people around the world might be culturally different, but they have similar desires. Individuals wish to lead happy, healthy lives. Parents want their children to get a quality education. People of all ages yearn to feel connected with their community in some way.

As a former teacher who believes in the power of education, I was utterly thrilled to have been invited to visit an elementary school not far from our Jimbaran, Bali guest house last week.

Strolling through a neighborhood district with few tourists, I saw children in blue and white uniforms. Then I stumbled upon Jimbaran School No. 5. 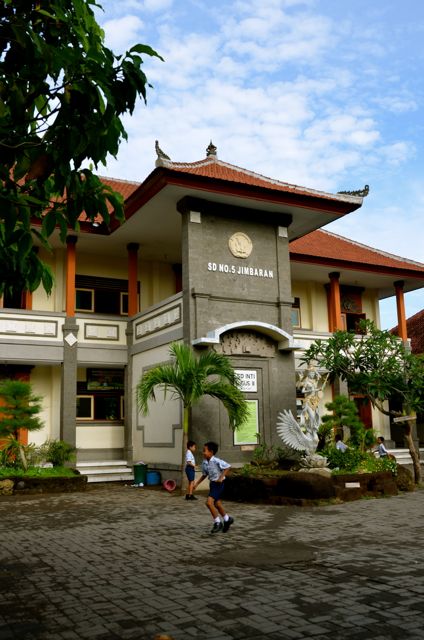 Instantly, I was introduced to Miss Erna, the English teacher. Erna invited Shawn and me to visit the school again the following day – not only to take part in her 5th grade English class, but also to observe as the school’s children participated in a full moon celebration.

Armed with miniature bags of German gummi bears for the class and a desire to learn more about Bali’s schools and celebrations, Shawn and I returned together the next morning. We felt like instant celebrities as children flashed wide-toothed smiles, hearty waves and boisterous Hellos. 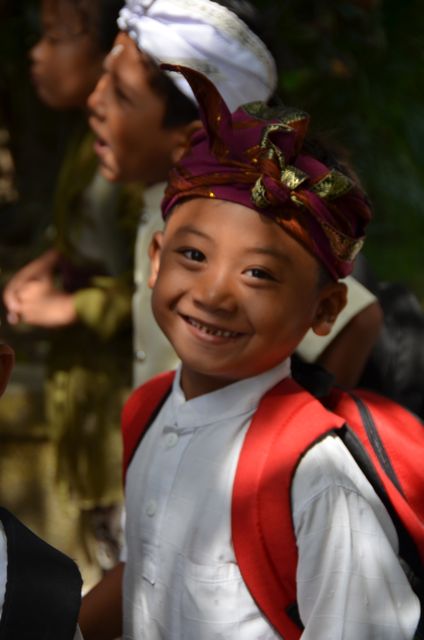 The majority of the children in attendance at the all-school ceremony were dressed in special Balinese ceremonial dress – the girls wore radiant tunics, long skirts, light sashes at their waists, and flowers in their hair, whereas boys sported white shirts, sarongs, and scarves tied on their heads in the traditional Balinese manner.

Young boys roughhoused, until being corrected by their teachers. Girls huddled together and giggled. With such mischief abounding, I was reminded of similar antics I’d seen in classrooms in the United States.

The children then performed ceremonial prayers, as the smoke from the incense sticks at their knees danced through the air. Each student walked to the school’s temple and placed a canang sari offering before returning to the ground to rest. (Canang refers to the tray, which is often woven out of coconut leaf, while sari refers to the offering itself, which ranges from a small amount of money, to coffee or cigarettes. The items are placed on a bed of colorful flower buds.) While waiting their turn to make an offering, boys sat cross-legged, while girls rested on their knees and the tops of their toes. 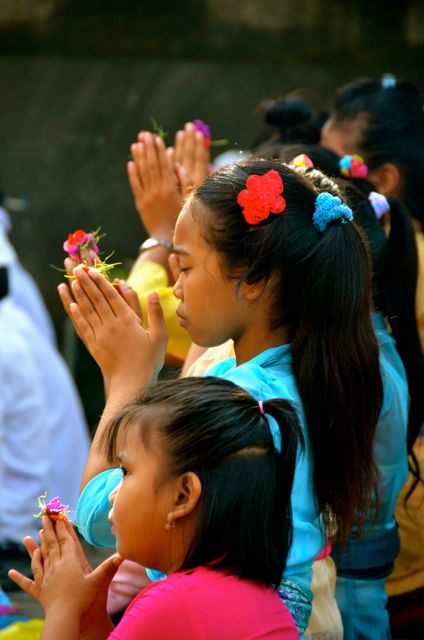 After the ceremony had ended, Shawn and our ever-growing entourage of children, led by Miss Erna, walked to the second-floor English classroom. Upon our arrival into the airy room, 28 students chanted, in unison, “Good morning.”

Several pairs of children had the unexpected surprise of performing their dialogue exams in front of not only their teacher and classmates, but also two American visitors. How intimidating it must have been to have two native speakers there as they exchanged greetings. 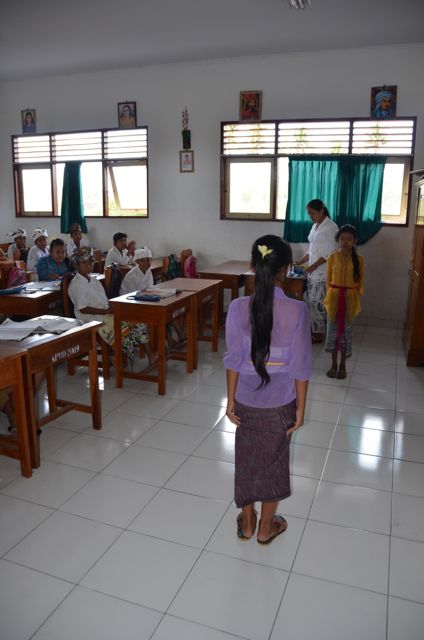 Child 1: “What time did you have breakfast?”

Child 2: “I had breakfast at seven o’clock.”

After the dialogues were complete, Shawn and I circulated through the classroom, extending the exercise. Neighboring classmates giggled as we approached a student to pose various questions. Sometimes, the child whom we’d chosen to dialogue with cradled his or her head on the school desk and laughed incessantly. After the laughter subsided, we learned about favorite foods (chocolate ice cream) and morning rituals (most of the children walked to school; sometimes the commuting distance kept them from eating breakfast). 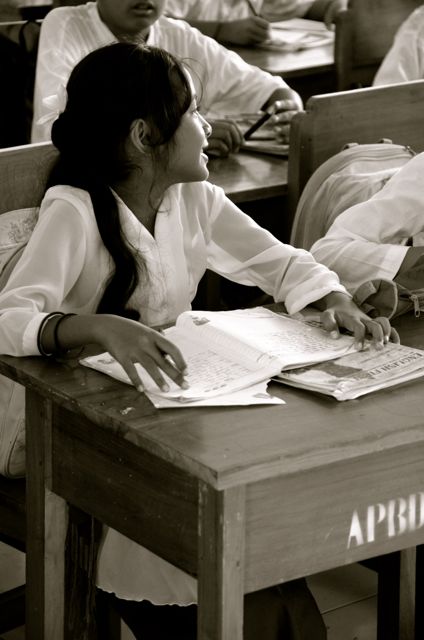 As the thirty-minute English class drew to a close, we engaged in a bit of gummi bear diplomacy, sharing an individual bag of the German treats with each student. Children who had previously been shy to engage with us had grown increasingly playful as the morning went on, and they now tossed about a surplus of English words and phrases.

A group of children encircled us as we proceeded through the classroom door, down the staircase, into the sunny school courtyard. With an energetic “goodbye” they bid us farewell as we reached the school’s gate. An incense stick’s smoke wafted in the breeze.

Miss Erna and I discussed the possibility of establishing a pen pal correspondence program with her students and native English speakers. Having done this myself, as a high school French student, I know how the experience of corresponding with a native speaker can heighten a desire to learn a foreign language. Regular exchanges also made my studies holistic in that I had a real reason to study beyond textbook exercises. In fact, I am still in contact with one of the French students I was introduced to 18 years ago!

If you are a teacher with a classroom of native-speaking English students, or if you know of a teacher who would be interested in connecting with a class of Balinese students who are learning English, please contact me so that I may put you in touch with Miss Erna.

Published by Tricia A. Mitchell

Tricia A. Mitchell is a freelance writer and a co-founder of Eloquence. Born in Europe but raised in the United States, she has lived in Valletta, Malta, as well as Heidelberg, Germany. An avid globetrotter who has visited more than 65 countries, she has a penchant for off-season travel. Tricia has learned that travel’s greatest gift is not sightseeing, rather it is the interactions with people. Some of her most memorable experiences have been sharing a bottle of champagne with distant French cousins in Lorraine, learning how to milk goats in a sleepy Bulgarian village, and ringing in the Vietnamese New Year with a Hanoi family. She welcomes any opportunity to practice French and German, and she loves delving into a place’s history and artisanal food scene. A former education administrator and training specialist, Tricia has a bachelor’s degree in elementary education and a master’s degree in international relations. She and her husband, Shawn, married in the ruins of a snowy German castle. They’ve been known to escape winter by basing themselves in coastal Croatia or Southeast Asia. Though they are currently nomadic, they look forward to establishing a European home someday. Her writing has appeared in Fodor’s Travel, Frommer’s, and International Living. View more posts

29 thoughts on “Lessons From a Balinese Classroom: Our Visit to an English Class in Jimbaran”

This site uses Akismet to reduce spam. Learn how your comment data is processed.