From extraordinary seaside cities and stunning national parks to fascinating heritage sites, Croatia has it all.

Shawn and I are fortunate to have spent four winters in Croatia’s Dalmatia region. We were even unexpectedly “stuck” in Croatia for 15 months during the earliest stages of the COVID-19 pandemic. (Spoiler alert: we were very fortunate to be in such a picturesque country during that uncertain time, especially since we had so many natural spaces in our backyard to explore.)

Over the years, we’ve gotten to know Croatia — and its kind and inviting people — quite well. We’ve mingled with talented winemakers. We’ve also learned how to make silver filigree jewelry and traditional hearty dishes like peka. And, we’ve visited a handful of the country’s gorgeous islands. One summer, we even explored parts of Istria and lesser-known spots in inland Croatia.

Below, you’ll find my clickable Croatia index, as well as destination-specific tips, accommodation, and transportation resources.

Shawn and I have spent four winters in Croatia’s Dalmatia region, and one summer divided between Pula (in the Istria region) and Ludbreg (a tiny town in Inland Croatia). We also spent 15 months in Croatia during the earliest days of the pandemic, dividing our time between Makarska, Split, and Solin.

During our wintertime visits, we found lodging in prime locations that would have been fully reserved had it been summertime. During chillier months, however, apartments in these Dalmatian cities were practically empty.

A listing of properties we would happily revisit follows. (Some are affiliate links.)

Shawn and I spent six weeks exploring parts of inland Croatia, using the charming Villa Mila as our home-base. Ludbreg is not a touristic place, and that’s part of what made our stay there so special. The Villa Mila’s owners, Igor and Tanja, and their two adult children were a delight, going out of their way to make our visit memorable. The people of Ludbreg were equally friendly, and our social calendar was replete with BBQs, lessons in jarring pickles and cherries, wine tasting, and more.

Igor, Tanja and family are a creative bunch, and Tanja is a children’s clothing designer. You can see her special touches in the Villa Mila’s curtains, pillows, and decor. From Ludbreg we visited Varaždin a few times (it’s accessible by train) and we also visited the Trakošćan Castle. Ludbreg has its own train station with easy connections to Zagreb.

We stayed in the Apartments Missy for roughly one year, during the early stages of the pandemic. This 1-bedroom apartment is on the top floor and features skylights. A small balcony on the back of the apartment overlooks Makarska’s harbor — the views of Makarska’s dramatic mountains are wonderful!

It takes about 8 minutes to reach Makarska’s bus station on foot. In a matter of minutes, you can also walk to Makarska’s Riva (seaside promenade), several grocery stores, restaurants, and cafés.

The apartment’s owners, Mise and Anna, are exceptionally friendly and helpful.

We called Pula home for about one month, when the summer season was just around the corner. We split our time between two pleasant apartments, the Pension Natalija, and the Apartment Ferienwohnung.

Both properties had friendly, helpful owners, and central locations within Pula’s Old Town. In less than five minutes, we could walk to the Roman forum or the Arch of the Sergii. The Giardini bus stop was equally close. Even Pula’s Arena was only about a 12-minute walk away.

We’ve spent three winters in Split, and have made it a habit to create new memories by staying in a different property every year.

For two and a half months, we stayed at the lovely Kaleta Apartments, which are located within Diocletian’s Palace. Our elegant studio apartment (called the ‘Diocletian’s Suite’) had lots of character, including Roman brickwork embedded into the wall. We had overhead views of life on Split’s Old Town streets, and we enjoyed chatting with the friendly owners, Novica and Negri.

Two years later, we returned to Split, but stayed in the Varoš neighborhood at the Guesthouse F. We especially enjoyed the studio apartments’ central location, plus our tiny terrace, and the kindness of our hosts, Anja and Miro. One of Guesthouse F’s apartments was originally a horseshoe maker’s workshop, owned by Anja’s grandfather. Shawn and I dubbed it the “horseshoe cottage.”

Varoš is just a few minutes’ walk from Diocletian’s Palace. With its quirky, narrow streets and stone homes decorated with hunter-green shutters and flower boxes, Varoš is charming.

Finally, we spent three months at the Viola Apartment, also in Split’s Varoš neighborhood. The apartment had two bedrooms, a lovely sun porch and garden, and a recently-renovated interior inside an old stone home. Owner Ljubica, who lives upstairs, was easygoing and helpful. We were in a perfect location for accessing Diocletian’s Palace and Marjan Forest Park, too. On foot, it took about six minutes to reach Split’s most famous lookout point near the Caffe Bar Vidilica.

Shawn and I stayed in a studio apartment at Apartments Mirkec in Trogir for 7 weeks. We were very happy there, as the apartment had good Wifi, and a kitchen with all the basics. It was also perfectly situated in the heart of Trogir’s Old Town, just a minute’s walk from the Riva.

We spent three nights at the Apartments & Rooms No.1 during the off-season. The biggest selling point of the studio apartment was the perfect location in Zadar’s Old Town. We were able to walk to the Roman Forum in a matter of minutes, and were among all the action. The apartment was cozy and clean, and the owner was friendly and accommodating. We slept with the window open (despite there being an air conditioning and heating unit), and the seagulls acted as our alarm clock the next morning. :) The internet worked well too.

Zagreb is deserving of a longer stay, but I always seem to be in transit when I’m there. One winter, Shawn and I stayed at Apartment Lucy City Center Rooms. The apartment was compact, but since it was centrally located, and had a pleasant kitchen and bathroom, it offered everything we needed for one night. The Uber ride from Zabreb’s train station to Apartment Lucy was a short one, too.

During a summer stay, we spent two nights at the ApartMeant To Be. The host was friendly and helpful, and the apartment was spacious and within walking distance to Jelačić Square and the Dolac Market.

We chose to base ourselves in the pretty town of Bol, staying at the Apartments Milena. While it was a bit of a walk from our apartment to Zlatni Rat (Croatia’s most famous beach), grocery stores, cafés, and restaurants, were an even shorter distance. Bol’s main bus stop, as well as the catamaran point, were about 15 minutes away by foot.

Milena, the apartment owner, brought us homemade cookies, and allowed us to have a late check-out. We didn’t speak a common language, but used Google Translate to converse. Milena and her family also kindly offered for us to use their outdoor oven, which would be great for cooking a traditional peka there.

On Hvar, we stayed at the Apartments Lucija in Stari Grad. It’s run by down-to-earth Lucija and her family.

Located in a quiet corner of Stari Grad, our comfortable apartment overlooked Stari Grad’s placid bay. Kind Lucija welcomed us with a small basket of clementines and lemons, which she’d picked from her backyard.

Wanting an Old World experience within Korčula Town’s city walls, we spent a trio of nights at Maria’s Place upon first arriving on the island. The room was cozy and situated on a quaint street, but it was a bit tricky getting our luggage up the cobbled lanes in the Old Town core.

When we decided to extend our time on the island, we moved to Apartments Ustavdic in the quiet community of Medvinjak. Owners Senija and Esad were extraordinarily kind to us, acting like family when Shawn had an accident that required him to go to the local clinic. The second-floor apartment in which we stayed for about two weeks had fabulous views of the Pelješac Peninsula. From the dining room, we enjoyed watching sailboats and small cruise ships glide by. We also swam in crystalline water just a few moments’ walk from their home. It’s best if you have a car here (we did not), but it is possible to walk to Korčula Town in about 25 minutes. Just be careful on the scenic main road linking the two towns, as there are some drop-offs without railings.

When I read other guests’ reviews praising the Apartment Mare’s magnificent views, I was skeptical. However, when we arrived, we couldn’t stop marveling at the magnificent vistas before us. The island of Biševo was straight ahead, framed by swaying sea palms and Vis’ rugged coastline.

Even though we visited Komiža during the winter months, the weather was pleasant enough to sit on the balcony. We spent many hours there, soaking up the sunshine and staring out into the sea.

The apartment was cozy and clean, the internet and heater worked well, and our host, Katarina, was happy to answer any questions we had about the island. We were just a short walk (down stairs) to Komiža’s main beach, and the town of Komiža was only about eight minutes away.

Get inspired with my posts from Croatia:

Komiža, Vis: Savoring the Off-Season Charms of One of Croatia’s Most Remote Islands 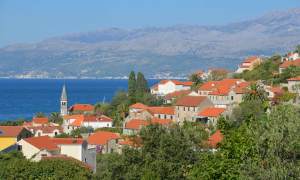 Brač, Croatia: Hunting for Hercules in a Roman Quarry

A Sanctuary for the Lovable and Threatened Donkeys of Split, Croatia

Around the World in 18 Barbers’ Chairs 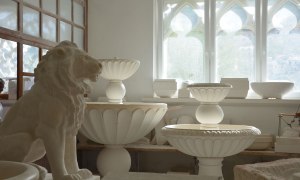 The Windows of Zagreb, Croatia

Exploring the Ancient Roman Ruins of Salona: A Day Trip from Split, Croatia

Escaping to Marjan Hill, the ‘Lungs of Split’ Croatia 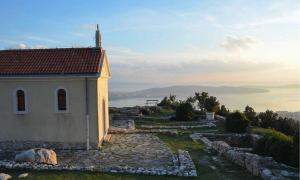 A Journey Through the Millennia: The Split Archaeological Museum in Croatia

Krolo Winery: Slow Food and Wine in the Croatian Countryside 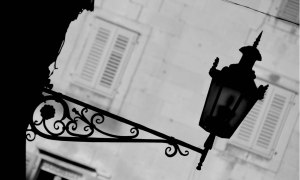 Split, Croatia in Black and White 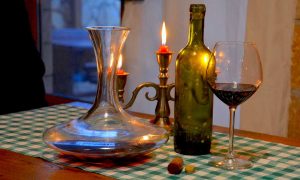 An Immersive Experience: Tasting Croatian Wine From Under the Sea

The Fountains of Dubrovnik, Croatia 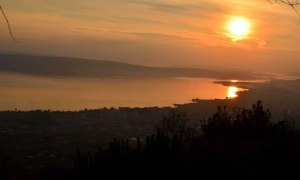 Croatian Food & Wine at 400 Meters: A Sunday in Split

Inside Diocletian’s Palace: A Walking Tour in Split, Croatia 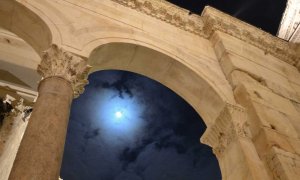 Making a ‘Split Decision’ in Croatia 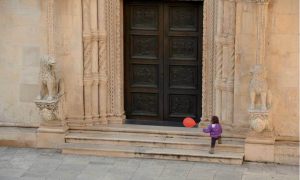 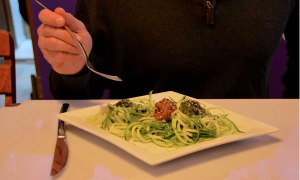 The Details of Dubrovnik – Meet the Maskerons

A Lesson in Cooking Peka, the Signature Dish of Croatia’s Dalmatia Region

A Farewell to Trogir, Croatia

Shades of Vertigo: Climbing the Bell Tower in Trogir, Croatia 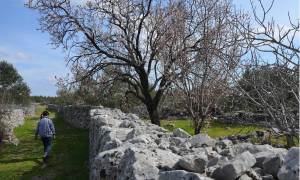 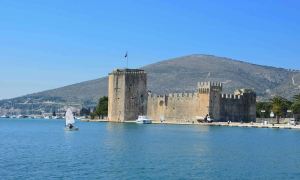 Sailing the Adriatic: A Day Trip from Trogir, Croatia

A Walking Tour of Trogir, Croatia 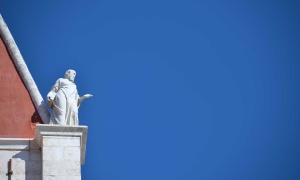 The Blue Skies of Trogir, Croatia 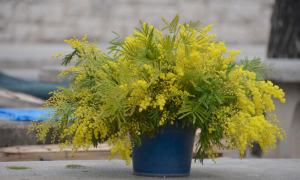 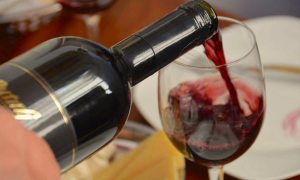 The Hunt for the ‘Original Zin’: A Wine Tasting Tour of Croatia 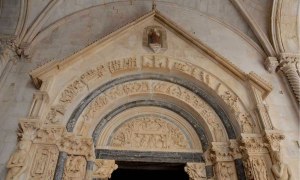 Flourishes Fit for a Fairy Tale: Admiring the Details in Trogir, Croatia

Getting Acquainted with Trogir, Croatia